The troubled past of Ponte Vecchio

Not much is known about the origins of Ponte Vecchio, one of the most famous bridges in Italy, as well as the oldest bridge in Florence.

We only know that at some point, the Romans decided to build a bridge over the narrowest point of the Arno River within the city. Immediately, the merchants settled on the bridge to take advantage of the strategic position that allowed them to come into contact with the numerous travelers who passed by every day. Let's not forget that Ponte Vecchio remained the only bridge over the river until 1218.

We don't know exactly when it was built, but we do know that this ancient bridge was rebuilt several times over its long history.

In 1333 a terrible flood devastated the city of Florence and not even Ponte Vecchio was spared. It was destroyed by the water which carried away its entire structure, along with the large statue of the god Mars to whom the Romans had dedicated the city, leaving only two pillars standing.

The reconstruction works on the "new" Ponte Vecchio began immediately after the flood and ended in 1345, under the guidance of Taddeo Gaddi, who helped create what turned out to be one of the most beautiful and avant-garde bridges in medieval Italy.

Over the centuries, many more of these "suspended" shops were built, but they weren't quite the kind we see today. Those who sold their goods on the Ponte Vecchio were mostly butchers and tanners, producing far too much foul-smelling and polluting waste that ended up directly in the river below. 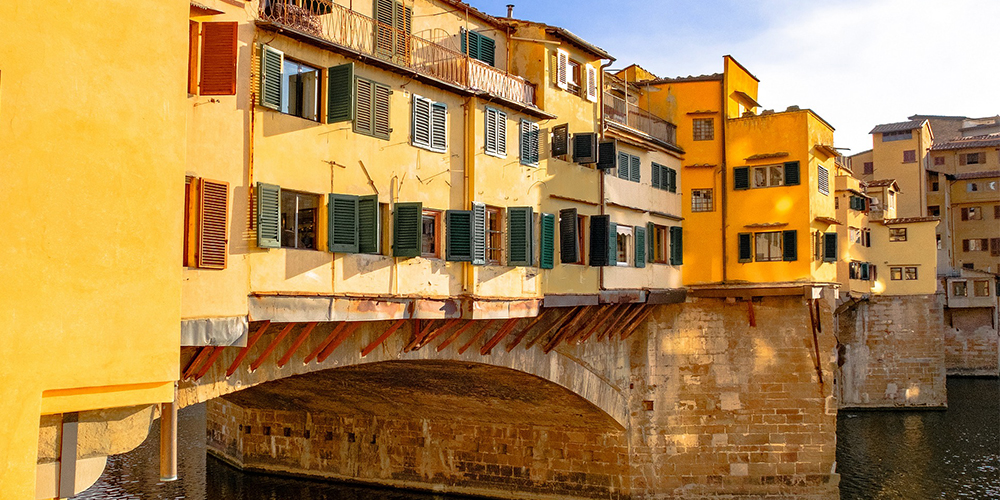 To make the bridge and the city more presentable to citizens and visitors, in 1593 the Grand Duke Ferdinando I decreed that only jewelers, goldsmiths and silversmiths would be allowed to work in the shops of Ponte Vecchio, thus eliminating the problem of waste. 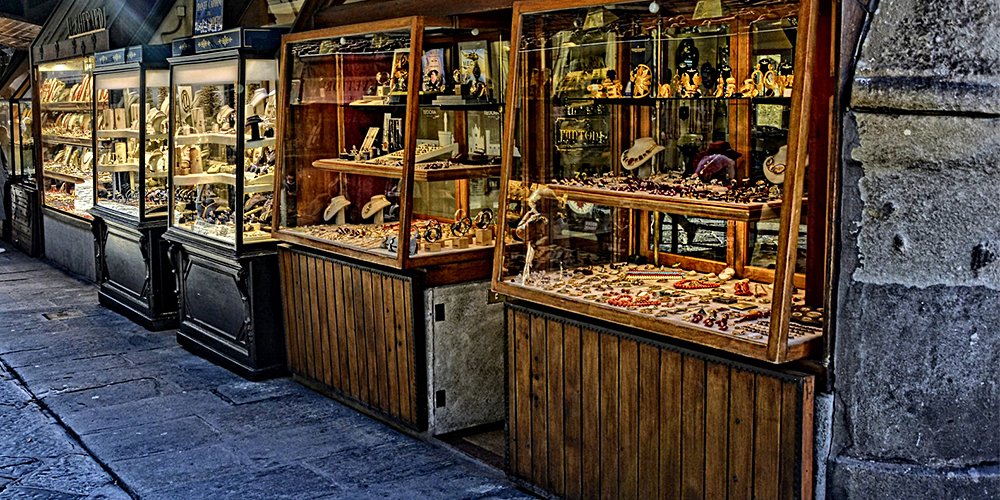 The number of shops increased after the construction of the Vasari Corridor in 1565, a sort of secret passage that allowed members of the Medici family to travel from their residence, Palazzo Pitti, to Palazzo Vecchio without going out onto the streets.

This new addition to the structure raised the walls of the bridge, creating more space so that the shops could be built on top of each other.

Taddeo Gaddi's design for Ponte Vecchio included four towers which were to serve as military defense points in the event of a siege of the city. Today only one remains, Mannelli’s Tower. His presence caused problems during the construction of the famous Vasari Corridor because the owners, the Mannelli family, refused to tear it down to allow passage of the corridor, forcing Vasari to quickly find a solution, which nevertheless proved to be effective: to build that section of the corridor around the tower.

Ponte Vecchio is also famous for another reason: it miraculously survived the bombings of World War II.

During the retreat of the German army from Florence, all the other bridges were bombed and destroyed, but Ponte Vecchio was the only one left standing. Legend has it that it was an explicit order from Hitler - notoriously passionate about art - to spare the ancient Florentine bridge.

In more recent times, Ponte Vecchio has managed to avoid destruction once again, admirably enduring the strong flood of 1966 which damaged much of the city.

To this day, Ponte Vecchio remains one of the most loved symbols of the city of Florence. Every day thousands of tourists and Florentines walk on its curved surface above the river, among the shops of the jewelers who continue to carry out their businesses here. However, the best time to appreciate Ponte Vecchio is at night, when all the shops are closed and the thick wooden doors make them look like ancient chests, evoking a magical and timeless atmosphere.