The Chapel of The Magi in Palazzo Medici Riccardi

Benozzo Gozzoli (c. 1421 - 1497) was a Florentine painter, a pupil of Lorenzo Ghiberti and Beato Angelico, known mostly for the frescoes in the Magi Chapel in Palazzo Medici Riccardi.

It was to him that Cosimo and Piero de 'Medici commissioned the frescoes for the chapel, a work that constitutes one of the most important illustrations of Medici Florence. It is reminescent of the traditional Medici parade through the streets of Florence on the day of Epiphany, and it was a way to celebrate the wealth and power of the family at the head of the Florentine Republic.

The pictorial cycle, painted between 1459 and 1463 approximately, occupies the three main walls of the chapel and represents the procession accompanying the three Wiese Men (Magi). The characters are dressed in contemporary clothes to refer to the present of fifteenth-century Florence, giving us an important testimony of the fashion of the time. They parade against the background of an almost late Gothic landscape, with manicured lawns and bushes and exotic looking plants. There are also castles, hunting scenes that include hawks and big cats, and other exotic animals such as camels and a monkey, that help give the scene a fairytale flavor.

Among the characters in the procession we can find numerous portraits: Cosimo de Medici with his sons Piero, Carlo and Giovanni, Lorenzo the Magnificent and Giuliano di Piero and the self-portrait of the painter himself. There are also portraits of bankers and political supporters of the Medici. 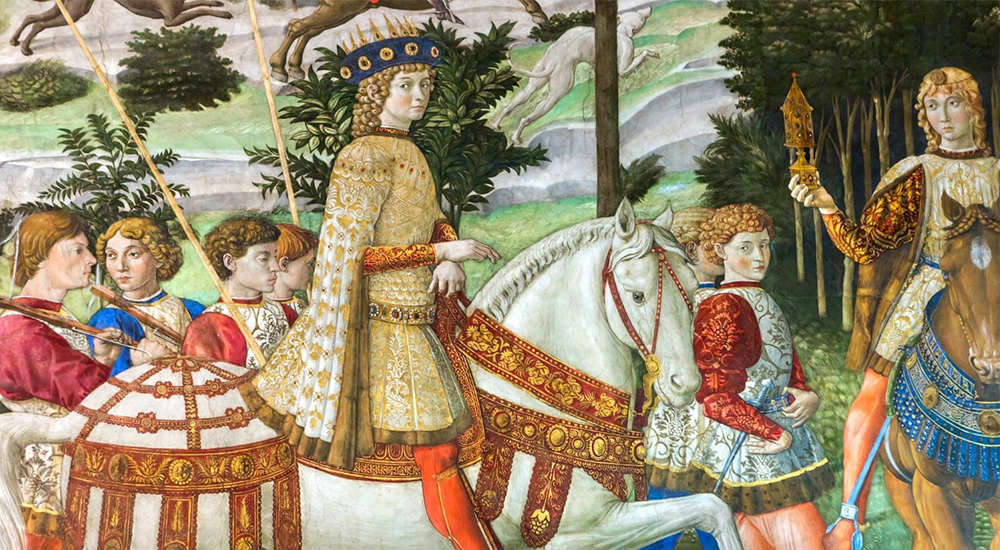 Strongly idealized portrait of Lorenzo the Magnificent, depicted as Gasparre.

The space with square plant of the chapel, with an adjoining apse, is completely painted, giving the impression of a continuous scene that develops around the viewer in a scenographic way.

The perspective rendering and the richness in details make the work even more amazing and opulent; not to mention the expensive materials used to make it such, like lapis lazuli intended for the blue of the backgrounds and the gold of the decorations, jewelery and embroidery.

On the wall of the altar the shepherds are represented waiting for the announcement, while in the apse are frescoed two choirs of angels on the sides of the altarpiece, a fifteenth-century copy of the original Adoration of the Child by Filippo Lippi which is located in Berlin .

Finally, the frescoes are complemented by the gilded ceiling and the colored mosaics on the floor.

So much richness and sophistication in such a small setting!