Florence welcomes in five of its major museums the works of one of the most important living artists in the world, Jenny Saville. This is a huge exhibition project, curated by Sergio Risaliti, director of the Museo Novecento, the fulcrum of the widespread exhibition.

Here we find about 100 works including drawings and paintings, strong, highly expressive images, at the center of which is always the human body: faces, naked bodies, groups of figures, which show motherhood, love, sexuality, femininity, strength and fragility of the human being, as only Jenny Saville can do.

The subjects are often represented in poses reminiscent of ancient statuary, Egyptian or archaic art, Renaissance art, being perfectly at ease within Florentine museum environments.

In the Museo Novecento, in the former church of the Spedale, a monumental portrait of a young blind woman, Rosetta II (2000-06), hangs above the altar. The place was purposely: from here, Rosetta, just like us, can look across the square, towards the open doors of the basilica of Santa Maria Novella, through which you can glimpse Giotto's huge wooden crucifix. 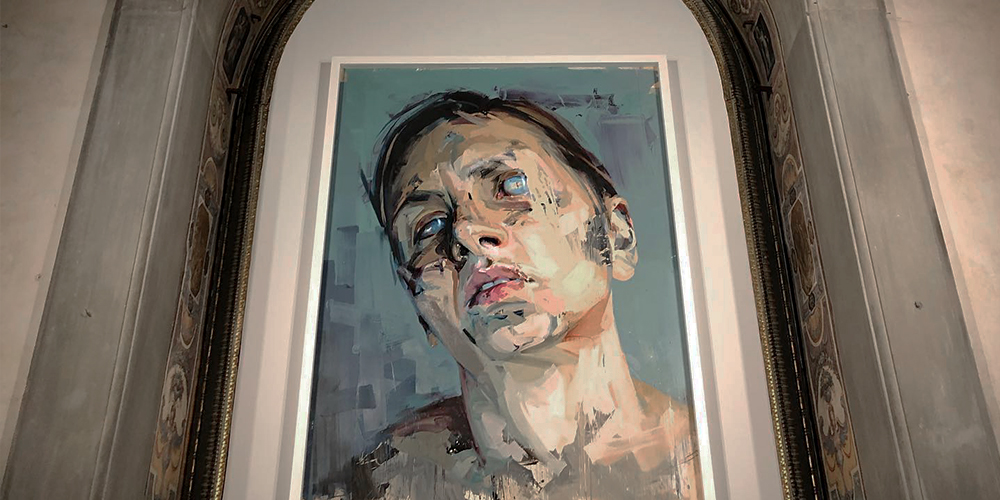 The other artworks on display are exhibited alongside those of great masters of the past at Museo degli Innocenti, Palazzo Vecchio, Museo dell’Opera del Duomo and Casa Buonarroti.

In particular, in the Pinacoteca of the Museo degli Innocenti we find the painting The Mothers (2011), centered on the female figure, always a great protagonist of Saville’s art, placed in dialogue with the Madonna and Child (1445-50 ca.) by Luca della Robbia and the Madonna and Child with an Angel (1465-76) by Sandro Botticelli.

In the Palazzo Vecchio, in the Salone dei Cinquecento, is on display the large canvas entitled Fulcrum (1998-99), an intertwining of bodies that testifies to the in-depth studies on human anatomy made by the British artist during her career. Jenny Saville has always been fascinated by the human body, by the flesh itself, so much so that in the past she has even witnessed a surgical operation, and she has studied corpses in the morgues.

The British artist has always considered Michelangelo to be the greatest of art masters, therefore the possibility of having her artworks interact with those of Buonarroti at the Museo dell’Opera del Duomo assumes an even greater value for her and her work. Here, next to the Pietà Bandini (c. 1547-55), there is therefore Study for Pietà (2021), a large-format drawing on which the artist began working right after visiting Florence.

The dialogue with Michelangelo continues in the rooms of Casa Buonarroti, where the drawings by Jenny Saville, Study for Pietà I (2021) and Mother and Child Study II (2009) pay homage to the drawings of the great Renaissance master.

An exhibition of great depth, which shows the human being to human beings. Those represented in the works of the London artist are not simply naked people, they are people bared naked, shown for what they are inside and out, going beyond the search for beauty and the aesthetic standards that society imposes. Jenny Saville tells of an abundant beauty, full of facets, but most of all, real.