Out of town: the Castle of Sammezzano

A 30 minutes drive from Florence, there is a truly spectacular place, that looks like it came out of a fairy tale: the Sammezzano Castle.

Sammezzano Castle is the most important example of Orientalist architecture in Italy and is located in the municipality of Reggello in the province of Florence.

Ferdinando Panciatichi Ximenes of Aragon redesigned the entire property, and the large park that surrounds it, between 1853 and 1889, following his passion for that current called Orientalism, which spread throughout Europe at the beginning of the nineteenth century.

Ferdinand was an exceptional and passionate person, science expert, philanthropist, patron, collector, and a great music lover. For the restructuring of Sammezzano, he used only local workers, and the majolicas that decorate the castle were all produced on site.

Scattered around the rooms there are many quotes, mottos and phrases in Italian and Latin and the initials F.P.X which stands for Ferdinando Panciatichi Ximenes, who did not miss the opportunity to repeatedly sign his architectural masterpiece. 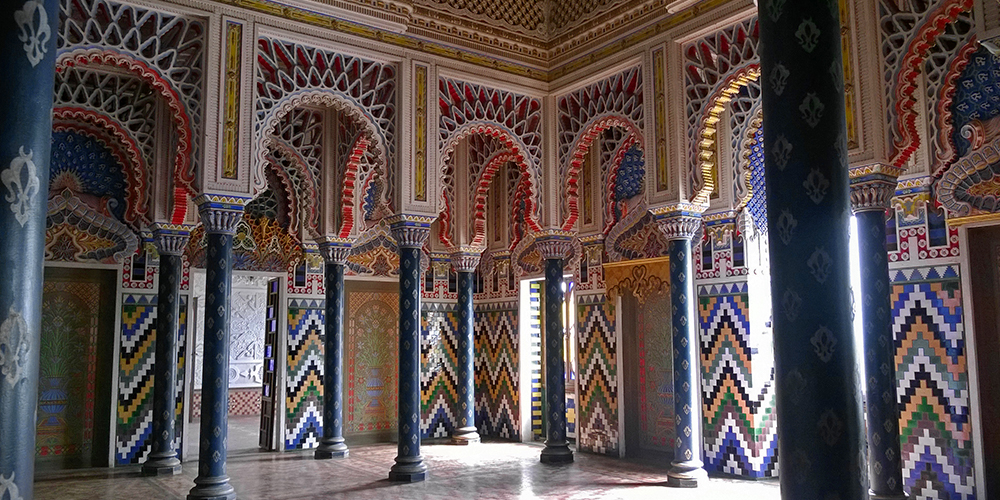 In the park around the castle, he planted exotic trees, among which sequoias stand out for their size and importance. In fact, here is the largest group of giant sequoias in Italy, as many as 57 specimens. One of these is the "twin sequoia", more than 50 meters high and with a circumference of 8 and a half meters.

The bridge, the artificial grotto, the fountains and other architectural structures found in the park are all made with Moorish-style elements.

On the outside, the Castle has a double facade that represents the sun and the moon. The Lunar Facade is the one presented to the visitor upon his arrival, while the Solar Facade is located at the rear of the castle.

Once you have explored the park, if you are among the lucky ones who will be able to book a visit to the castle, you can admire the spectacular interiors, all strictly decorated in Moorish style, which served as a film set for the film The Tale of Tales by Matteo Garrone, with Selma Hayek and Vincent Cassel.

Sammezzano is an incredible mix of Arabesque and Indian elements that come together in a rich, colorful and sumptuous decoration, clearly inspired by the Alhambra in Granada.

The Entrance Hall, or Sala del Non Plus Ultra, is a triumph of mirrors, columns and stained glass windows, crowned by a beautiful coffered ceiling. On two doors we find the words "NON PLUS ULTRA", indicating that there is no place in the world more beautiful than this.
From here we access to the Sala delle Stelle (Hall of Stars), which takes its name from the star-shaped stained glass windows and is inspired by the hall of the two sisters of the Alhambra. Majestic and beautiful is the Ballroom or Sala Bianca (White Room), the largest of the whole castle and uniquely built in Moorish style. It has an octagonal plant, a white stucco dome supported by columns and a floor with glass rosettes to filter the light as well as a marble grate at the center from where water used to gush, forming a fountain.
The smaller Hall of Mirrors or Sala delle Farfalle (Hall of Butterflies) is no less spectacular. Wonderful is the dome made of muqarnas, a decorative solution in the shape of a honeycomb or stalactites, typical of Islamic architecture, to which Ferdinand added mirrors in order to create plays of light inside the room.
Finally, and certainly the most famous, is the Sala dei Pavoni (Hall of Peaocks), the most photographed in the whole castle. Its ceiling has been included by BBC among the 10 most beautiful in the world.
Originally used as a dining room, the decoration of this hall is of Islamic, Persian and Indian inspiration and is characterized by the fan motif reminiscent of the colored tail of a peacock.
These are just some of the magnificent rooms of the castle, one of the most incredible and surprising places in Italy and also one of the most difficult to visit. And to think that after the war it was used as a luxury hotel and you could even spend the night here! 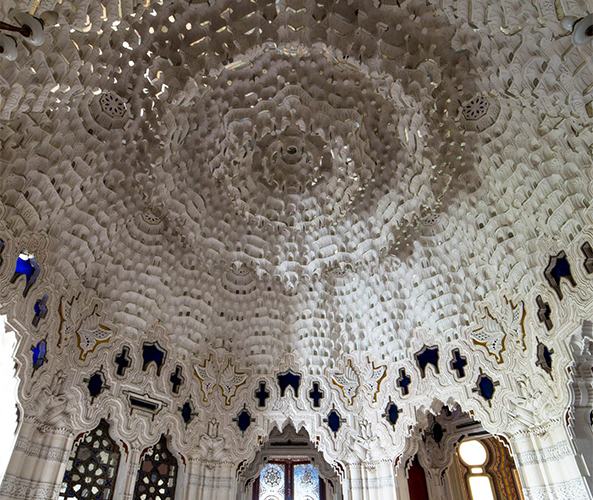 Visit the castle
To this day the castle is in the hands of private owners and in a state of neglect. Useless were the auctions set up to look for an investor who would allow a proper restoration and open the castle to the public for regular tours.
The castle is open to visitors only on the occasion of events such as the FAI Spring Days organized by the Italian Environment Fund, and the numbered entrances are sold out in minutes. We recommend keeping an eye on the castle's website and facebook page, in order to seize the opportunity to book a visit as soon as new dates are announced.