If you pay a visit to the Basilica of San Lorenzo these days, you will come across a giant over 5 meters high leaning against the side of the church. With his mighty muscles, he has already "supported" the Medici Palace in Seravezza, the Cathedral of Pietrasanta and Carrara, the Basilica of San Michele in Lucca, the Arco della Pace in Milan and the Fortino del Forte dei Marmi.

Or maybe he was "pushing" them away? This is the question around which is created the work of the contemporary sculptor Emanuele Giannelli, entitled Mr. Arbitrium, playing on the ambivalence of the force exerted by the giant on the building on which he leans against to.

According to the artist, people are continually called upon to decide whether to reject or support an ideology, progress, a change or a challenge, thus making a choice that will lead them to shape the future.

This decision for the future must already be taken now, this is where Mr. Arbitrium comes into play, which precisely represents "arbitrariness", the ability to choose in making and judging.

"When in doubt about which philosophical and cultural direction to take, each of us will put their “Io” into play, acting according to their own abilities and conscience." Giannelli explains.

The sculptor was born in Rome, but he moved to Carrara as a boy to study marble and classical sculpture. The study of sculpture took a more contemporary direction, thanks to his travels around the world and his encounter with post-human, cyber-punk, industrial music, and alternative illustration.

The artist eventually moved to Pietrasanta, where he experimented with materials and new techniques until he arrived to the current results, works in which the human figure is always the protagonist.

His work expresses ambivalence not only through the choice he asks us to make as in the case of Mr. Arbitrium, but also through the material and the style with which it is created.
A work of classic inspiration, a muscular nude, with a marble appearance, which, however, has a completely contemporary nature.

Giannelli's giant seems to be of solid and heavy marble, but it is made of resin with a complex technique, and then stuccoed and hand painted with a marble effect.

Similarly created, we find inside the cloister of San Lorenzo other works by Giannelli, from the series entitled I Sospesi (the suspended ones): sculptures that represent the condition of , who find themselves as if hanging by a thread, suspended in the chaos of contemporaneity and its continuous transformation.

Once again ambivalence comes into play: figures that look like heavy bronze sculptures, float, light-weight, hanging from the ceiling.

Mr Arbitrium's sculpture did not even have time to be installed and has already aroused a series of ironic jokes from the Florentines.
The sculptor, however, immediately declared himself happy with this: “The beauty of it, is that everyone passes by the sculpture and they can have a say about it. It is known that the Florentine does it without restraint and with irony. Life is heavy already, so let's have a laugh. I think that irony is a symptom of intelligence. ” 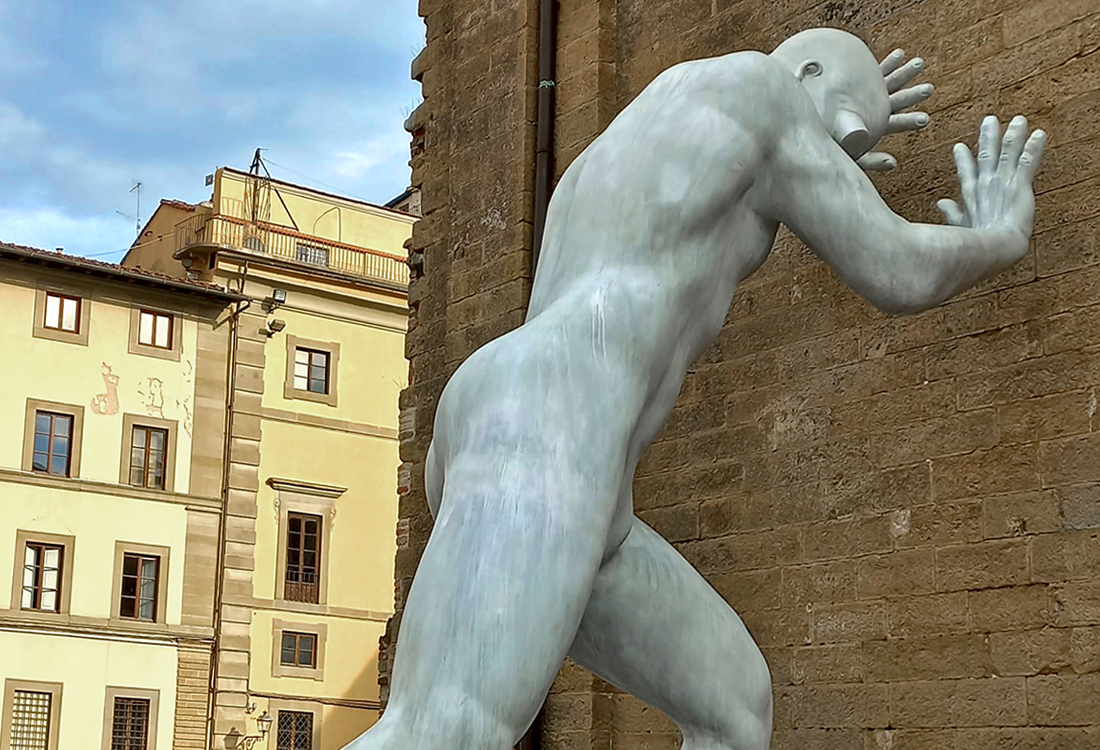