September 8, 2022, one of the greatest icons of the 20th century, Queen Elizabeth II of England, dies.

She is perhaps the most famous contemporary personality in the world, certainly known by anyone globally. Everyone recognizes the Queen's face, her brightly colored outfits and her hats.

She was a woman who made herself remembered and who inspired the work of many artists.

Andy Wharol declared: "I want to be as famous as the Queen of England", who he considered a true pop icon, and as such he portrayed her in his series of serigraphs, as he had also done with Marilyn Monroe. Lucian Freud immortalized her with the crown on her head and a severe expression, in a provocative and expressionist style, and even Bansky made her the subject of her Street Art, turning her into Ziggy Stardust in a mural in Bristol.

However, the most famous portrait of Queen Elizabeth II, and the most loved by the British people, remains the one executed by the Italian painter Pietro Annigoni, in 1954 and which earned him the nickname of "painter of queens".

Annigoni was born in Milan in 1910, but moved with his family to Florence where he studied and lived most of his life, spending the remainder of it traveling, especially in Europe. He was a great portraitist, and the first Italian artist after Titian to be called "to court" for a commission.

In 1949, Annigoni had moved to England, and thanks to a letter of recommendation from Salvatore Ferragamo, of whom the painter had painted a portrait, he had managed to exhibit at the Royal Academy. He thus secured an important showcase for his works, that did not go unnoticed.

When five years later, he received the letter from the Fishmongers' Company - one of the livery companies of London, similar to the guilds of arts and crafts of Medieval and Renaissance Florence - which commissioned him to paint the portrait of Elizabeth II, Annigoni could not believe it. Although the prestigious commission put him under a lot of pressure, the painter did not back off and immediately set to work.

During the 16 sessions that it took to complete the portrait in his studio, the painter and the Queen spoke in French among them, as he was not very fluent in English, and they talked a lot. The Queen seemed to like making conversation and she told him about her childhood and how she loved watching people from the window of her palace.

Precisely these stories inspired the artist to portray her with a countryside landscape behind her, reminiscent of the backdrops of Florentine painting of the second half of the 15th century, and which deliberately made the monarch appear as a woman isolated from the rest of the world.

Annigoni portrays the Queen wearing the robe of the Order of the Garter: a dark cloak with a white silk lining, the same silk as the ribbons and cockade pinned to her chest. He decided to refer to the ancient tradition using a three-quarter cut that portrays the subject from the knees up.

The Queen's gaze is proud and turned towards the distance, it is the gaze of a young queen who has just ascended the throne, but is already self-confident and ready to leave her mark in the history of England.

Annigoni's work was highly appreciated by the royal family, and in 1969, the painter was called once again to paint a portrait of the Queen, this time represented in a very different style and wearing the scarlet robe of the Order of the British Empire.

The one executed in 1954, however, remains the most loved portrait of the Queen, so much so that it also ended up on postage stamps. It was loved because it portrays a young Queen Elizabeth in an intimate and real way despite the classic and austere representation. 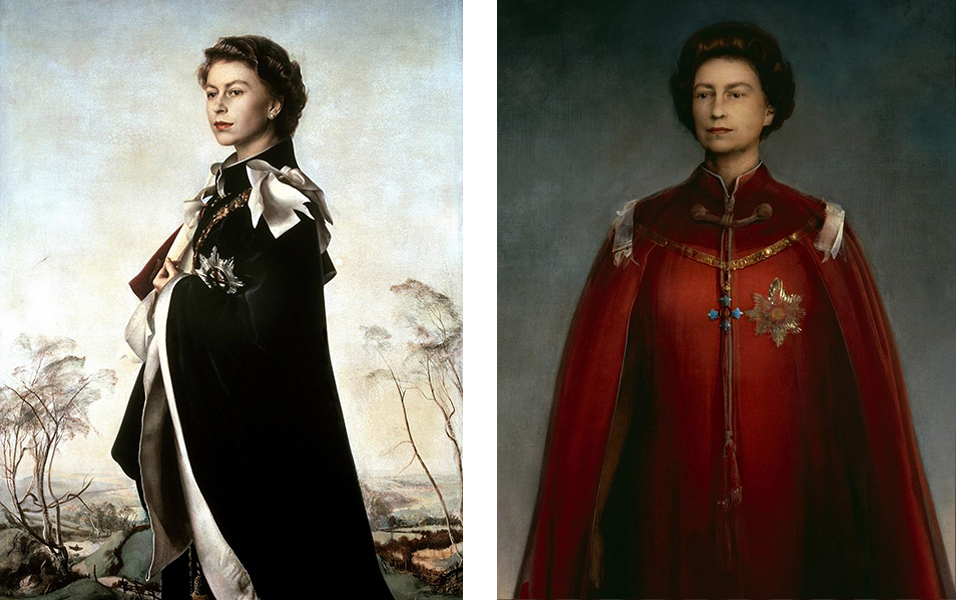